Will Obamacare Repeal Get Back On Track? (And Other Stories)

This article originally appeared on Axios.com

Will Obamacare repeal get back on track? 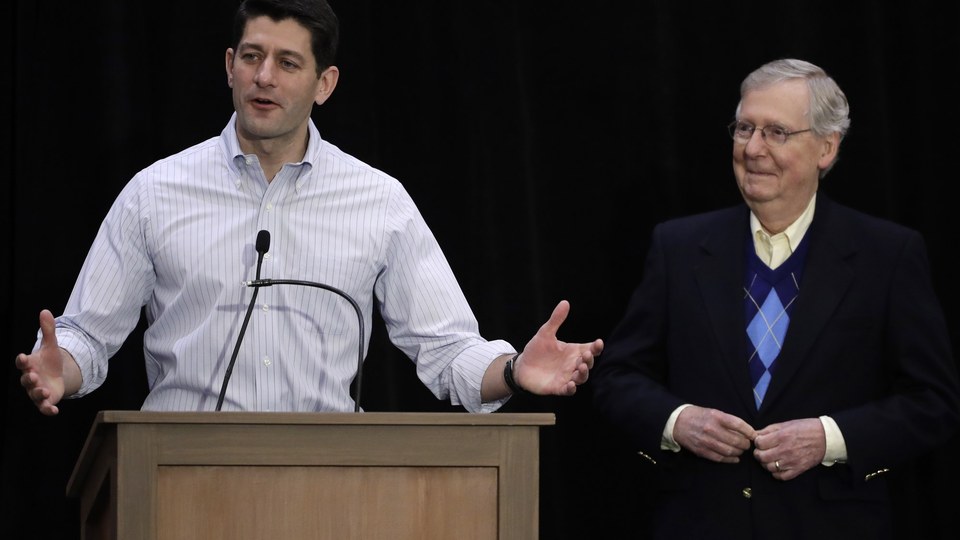 This week gives Republicans a chance to try to recover from last week’s stumbles, which included a GOP retreat that didn’t produce any clear consensus on an Obamacare replacement plan — but did produce a leaked recording of everyone arguing about it behind closed doors. There was also the Trump administration’s attempt to shut down Obamacare outreach, partially dialed back on Friday so it’s limited to $4 million to $5 million in TV and radio ads. (The official HealthCare.gov Twitter account is back to tweeting reminders to sign up.)

Couple of things to watch this week:

Will piecemeal work? It’s clear that the House, at least, is starting with a bunch of smaller Obamacare replacement bills, with crucial details they’re still working out. That’s certainly the case with pre-existing conditions (see below). Republicans are trying to shut down the talk that they don’t have plans, but they don’t have a ton of time to work out details if they want to meet their goal of a House vote by early March.

Will Obamacare enrollment recover? There won’t be a total blackout of Obamacare outreach after all, but it’s not clear how much that will help the signup effort. One way or another, open enrollment is ending under an administration that’s hostile to the law. The message it sent by trying to stop outreach, according to Larry Levitt of the Kaiser Family Foundation, is that it “seems more intent on accelerating the demise of the health law than on running the program effectively and keeping insurance markets stable.”

The House Energy and Commerce Committee is probably going to take the continuous-coverage approach, which means people with pre-existing conditions will be covered as long as they have kept themselves insured. Here’s the discussion draft of their bill, which the committee will talk about at a hearing Thursday. It has all of the language about requiring the coverage from insurers, but the continuous-coverage language hasn’t been written yet.

Committee aides tell me that part is likely to be introduced by Rep. Susan Brooks, but the details — like how long a person would have to stay insured — are still being worked out. Their goal is to find the right incentives for people to stay insured, and to mirror employer-based coverage as closely as possible. Also still being discussed: whether to prevent insurers from charging more to people with pre-existing conditions, not just require insurers to cover them.

Other bills the committee will talk about on Thursday:

The catch with health savings accounts

There’s a dilemma with the likely Obamacare replacement plan that Republicans haven’t really grappled with, so Caitlin Owens grapples with it for them in a story this morning. They’ve spent a lot of time criticizing all of the sky-high deductibles under Obamacare, which is true with a lot of the plans. But as part of the replacement, Republicans want to expand the use of health savings accounts — which are tied to health plans with sky-high deductibles.

That’s not an accident, because they’re designed to expose people to more of the costs of their health care, which is supposed to make them more cost-conscious. But President Trump doesn’t want higher out-of-pocket costs, because that’s his case against Obamacare. As he put it in his ABC interview last week, “It’s too expensive. It’s horrible health care. It doesn’t cover what you have to cover.” Read Caitlin’s story here.

Why insurers are nervous about next year

Even before the Trump administration pulled back on Obamacare outreach, Bob Herman notes that health insurers were feeling jittery about what could happen to the marketplaces. Some could be ready to bail if the law is repealed, with or without a replacement. To understand why, check out this report from the Urban Institute and Robert Wood Johnson Foundation, where researchers interviewed executives at 13 insurers participating in the exchanges.

The most damage could come if Republicans torpedo the individual mandate while leaving the subsidies and ban on pre-existing conditions in place. “Pulling one leg out of the stool, we crash [individual market insurers] to the ground,” one insurer said. The report also noted insurers have until September to back out of the individual market for 2018, and they will do so “if there is substantial writing on the wall.”

House Speaker Paul Ryan has admitted that he and President Trump don’t see eye-to-eye on Medicare, but AARP isn’t taking any chances. It’s launching a TV and digital ad campaign today that highlights the clip of presidential candidate Donald Trump promising to “protect and save your Social Security and your Medicare,” ending with the message: “Now it’s Congress’ turn.” It’s a seven-figure national ad buy, including a turn on the Sunday talk shows this weekend.

That’s it for now. Let me know what we missed, and send those recordings of other closed-door meetings my way: david@axios.com.

What Does “Crossover” Mean?